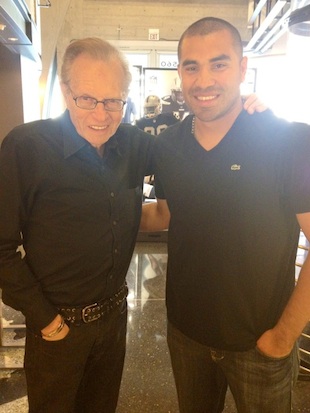 Scugog, Ontario, hello! You're on the line with Joe Carter and Felix Potvin. Go ahead!

Well, isn't this something? While playing in Los Angeles earlier this week, Toronto Blue Jays pitcher Ricky Romero had the fortune of running into Stew favorite Larry King —  a meeting that Romero documented with this picture that he posted to his Twitter account.

Better yet, the unlikely pair met in an even unlikelier place — a local Niketown — with Romero breaking the ice by saying he'd heard King had picked the Jays to win the AL East this season.

King's response, according to Romero, was "Who the hell are you?"

Romero told the story of his brush with the broadcaster while appearing on MLB Network's Intentional Talk on Thursday afternoon. (Here's video of the interview.)

"He was like, 'Yeah, I did predict that you were going to win the East. But how about you guys starting hitting now?'

"So I guess he does follow us and I guess, from what I hear, he's a big baseball fan."

The good news: Romero will  probably be happy to learn that one of King's other picks — Boston missing the playoffs — looks pretty good right now.

The bad: King picked the Tigers "in a runaway" in the AL Central and the Angels to win the AL West. So Romero has some waiting to do to see if King was right about his Jays.