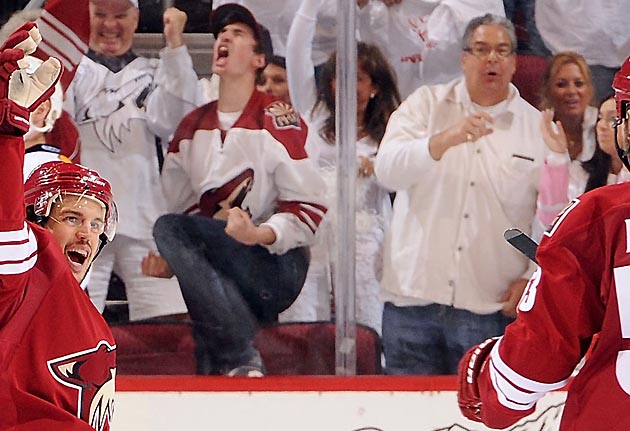 • There have been many fan celebrations were goals in these Stanley Cup Playoffs. None can rival the sheer orgasmic joy of this Coyotes fan, striking this very Napoleon Dynamite pose. Mark Miotto asks if this is the new  Gloating Bruins Fan. That is not for us to decide, dear readers …

• The racist tweets directed at Joel Ward of the Washington Capitals were a topic of conversation during anti-racism rallies around Boston over the weekend. [Boston Globe]

• The fallacy of trading Roberto Luongo: "If the team was building for the future, Schneider would be the guy. No question. But the Canucks are not building. The pieces are already in place. And that's why moving Schneider for a young forward is the only logical course of action. It's the only ace that this team has left to play." [Cave Mag, s/t Andy Roy]

• Alex Ovechkin on the "Ovi Sucks" countdown and chants at MSG: "I hope they're going to scream, 'Ovi's good.'" [WashTimes]

• Down Goes Brown offers excuses from NHL losers, including the San Jose Sharks: "We may have been officially eliminated from the playoffs but let's just say we still plan to be heavily involved, says Ryan Clowe cryptically while holding an extra-long hockey stick and a front row ticket to the finals." [DGB]

• The Ottawa Senators have a contract negotiation coming up with Erik Karlsson, and owner Eugene Melnyk expects his young star to be "reasonable" with the demands. [Ottawa Citizen]

• Paulina Gretzky once again conquers the Internet, this time with bikini photos. My goodness. [With Leather, via Bro Bible; NSFW)

• Jesse Rogers grades the Chicago Blackhawks, and an ESPN Chicago page designer makes everyone thing Patrick Sharp was given an 'F' upon first glance. [ESPN Chicago]

• Gary Roberts gets all fired up about Mike Gillis's criticism of Cody Hodgson: "It almost was like they thought he didn't want to work. Well, I can tell you that this kid out of all the kids that I train, he's up there in the [Steven] Stamkos group as far as commitment and determination. What I tell him, he does, so I know he's coachable and I love working with him." [Buffalo News]

• The Flyers had an announcement to make today, and it's about switching radio stations. [Broad Street Hockey]

• Yeah, so, Linus Omark is rather opinionated on Twitter. [Copper and Blue]

• Spector on whether the Boston Bruins should trade Tim Thomas. [THN]

• Bourne has a theory on why players make mistakes. [Backhand Shelf]

• Steve Lepore has your weekend NHL ratings: "In New York, both the Rangers and Devils performed quite well. The Rangers game against the Capitals on Saturday drew a 3.5 rating in New York, despite facing competition from the Knicks in the post-season, and the Yankees in the regular season. That number was up 17% from the last early Rangers semi-final game on NBC, against Pittsburgh in 2008. The Devils numbers may prove more impressive. The New York market drew a 2.5 for the overtime loss. That was the highest number for a Devils game in the New York market since 2006, when the Devils and Rangers cross-pollinated and drew a 2.8. It was also up 92% from the last Devils playoff game on NBC, against the Tampa Bay Lightning in 2007." [Puck The Media]

• Why Nicklas Lidstrom's retirement might not be a bad thing for the Detroit Red Wings. [Polished Pucks]

• Finally, it's been far too long since we had a little Steve Dangle for you. Follow him on YouTube here.