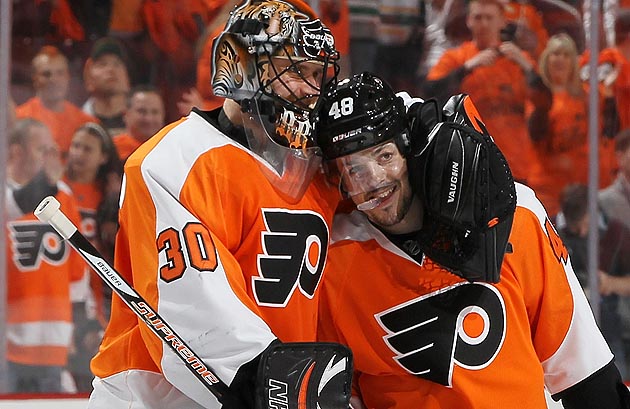 Briere's breakaway goal in the second period tied the New Jersey Devils, 1-1; his overtime goal at 4:36 — after getting a goal called back for kicking it in earlier in OT— gave the Flyers the 4-3 win and a victory in Game 1 of the semifinals. He now has seven goals in the postseason.

The Coyotes forward helped Phoenix overwhelm the Nashville Predators in the second period en route to a 5-3 victory in Game 2, sprinting out to a 2-0 series lead. Vrbata scored on a misplay by David Legwand and then sent this terrific pass to Martin Hanzal to build a 3-1 lead.

The Devils captain scored 3:16 into Game 1 and set up Travis Zajac's power play goal in the OT loss.

Honorable mention: James van Riemsdyk scored his first of the playoffs, was a plys-3 and had a strong game. .. Jakub Voracek had two assists. … Antoine Vermette, Vrbata and Shane Doan each had a goal and an assist. Taylor Pyatt scored his third of the playoffs. … Andrei Kostitsyn, Patric Hornqvist and Ryan Suter had the Predators' goals. … Mike Smith made 30 saves for Phoenix.

Dishonorable mention: Gabriel Bourque and David Legwand were a minus-3 for the Predators. … Pekka Rinne has given up nine goals in two games vs. the Coyotes. … Ilya Bryzgalov and Martin Brodeur both had thief their strong moments, but also had equally shaky ones. … Ilya Kovalchuk was a minus-2, had no shots on goal and wasn't forthcoming when asked about a possible injury after the game. … The Devils took six minors to the Flyers' two. … Finally, this odd Legwand hand pass mistake embarrassingly led to a Coyotes goal: