Mickey Mantle’s Restaurant faces eviction, needs ‘$1 million to get back on its feet’

A restaurant named for the late New York Yankees icon Mickey Mantle finds itself on the verge of eviction, and its owners are going around cap-in-hand to former big-league ballplayers trying to raise money to pay its debts. Mickey Mantle's Restaurant, which the Mick himself once owned a 7 percent stake in and frequently patronized before his death, hasn't paid rent in four months and needs to raise "$1 million to get back on its feet."

That's the word in the New York Post from Bill Liederman, who was Mantle's original partner when the restaurant opened in 1987 and recently has been brought back by current ownership to save the failing sports bar, which apparently has been hit hard by the recession.

To raise the dough, he's trying to persuade former pinstripers including David Cone, Ron Guidry and Goose Gossage to chip in as little as $10,000 each.

But Liederman says he can't get to first base with current team members. "Their agents just laugh," he said.

"As little as"! Based on the era in which he played, it's possible that Cone might be walking around with $10,000 of tip money, but ten grand is probably big bucks to Guidry and Gossage and most of their contemporaries. As for today's Yankees? They owe Mantle's memory respect and honor, for sure, but that doesn't necessarily translate to bailing out a failed business that slapped his name on the front door.

Regardless of the amount, isn't it keen how the restaurant (and the Post) tries to shame the ballplayers into throwing good money after a bad idea? Someone should ask first: Is this restaurant even worth saving? 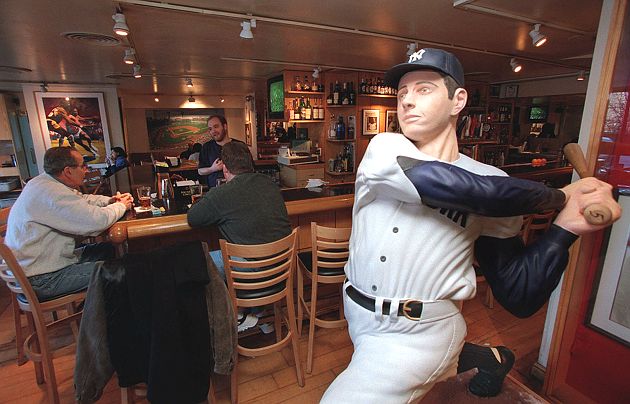 Not only has the restaurant been putting out a mediocre product at best (and here) (Trip Advisor was more kind), but ownership has tried some pretty silly stunts in the past, Swan writes:

In 2004, when the Boston Red Sox beat the Yankees in the ALCS, it was naturally one of the most horrible times ever for Yankee fans. So what did Liederman do? He announced that he was renaming the place from Mickey Mantle's Restaurant to Ted Williams' Restaurant through the end of the World Series. He also sold Red Sox hats in the store.

Then Liederman had the gall to say that The Mick gave him the idea: "His spirit came to me when the game was over and said, 'Bill, let's do this for my favorite player. Let's put Ted's name up there for a week,'" Liederman told the press at the time. How ridiculous.

Taking it a step further, it's not like this place was active when the Mick played. It might have some value as a historic site because, well, Mantle drank there for a few years. But someone else owns most of the memorabilia in the shop. Mantle's family doesn't have a stake there anymore — and it's not like they ran it and it fell into disrepair. He's got another restaurant, a steakhouse in his hometown of Oklahoma City, that bears his name. It's not like we're going to forget about Mickey Mantle if the poorly run tourist place in New York goes under.

It's best to let it go. And leave poor David Cone alone.