Behind the Box Score, where Kevin Durant downed the Mavericks with a game winner (VIDEO)

On the day of a playoff opener that gave us cruel season-ending injuries and some pretty bad basketball at times, the Oklahoma City Thunder and Dallas Mavericks came through with a classic in any round, sealed off by Kevin Durant's twisting, bouncing eventual game-winner with 1.5 seconds left on the clock.

It was a fitting end to a game that neither team were ever in control of. Though Dallas led for most of the way, the Thunder refused to back down in spite of Durant's early shooting woes, and the lights-out marksmanship of Mavs guard Jason Terry. By the time Russell Westbrook put the locks down on Terry to end the JET's burn, Dirk Nowitzki took over with a nine point run of his own, followed by a couple of turnovers, and what looked to be the potentially game-sealing free throws with nine seconds left in the game.

[Nowitzki: This is definitely as tough of a loss as you can get]

Durant, patiently, saved his best for last. He couldn't help it, after that slow start, but he peeled off a pair of fantastic assists in the game's final minutes before watching his rolling, almost running one-hander drop in. And though he struggled with his shot throughout (missing 17 of 27 overall), Durant offered fantastic help defense both in terms of changing shots (the youngster was a bit cruel to Dallas Vince Carter at times, though we appreciated VC's aggressiveness), and literally sending them back with four blocks.

Honestly, despite some poor shooting numbers, it was hard to find someone that played poorly.

Brendan Haywood was a consistent defensive helper for Dallas, and replacement Ian Mahinmi actually nailed a couple of crucial late game free throws after being fouled. Kendrick Perkins was burned a few times by Nowitzki defensively, but he also played expert defense on the Dallas big man at a time where the Mavs looked to be capable of putting the game away. James Harden was brilliant on both sides of the ball, Westbrook was his typically potent self with 28 points on 23 shots, and Jason Kidd got all throwback-y with an endless array of steals (six), a block, and intelligent and tricky play on the other end. Shawn Marion, even, had a fantastic night with 17 points and eight boards for Dallas — once again holding it all together on both ends for the Mavs.

I've absolutely nothing to criticize. These teams could have played another 20 minutes, and it would have ended as a one-possession classic not unlike the one we saw when these two teams met up in the first week of the regular season.

All we can ask for is six more.

It's good for the Orlando Magic and Indiana Pacers to remind us that the players still have to play these games. That the players who typically make good shots, open shots, still have to watch the shots fall instead of seeing them spin around and out. And though Darren Collison's late game two-pointer with Orlando up three wasn't the best look we'd have drawn up, the Pacers just couldn't hit what in my opinion were pretty good looks down the stretch, with Danny Granger and Paul George clanging away. With that in place, the Magic pounced. It's not on paper.

This could be the "one," that most of us pegged the Magic to get, though. Don't discredit Orlando's abilities defensively, even with Dwight Howard out, because this team has versatile players that move their feet. But Indiana missed 57 shots and nine free throws in this game, and that's not happening again, even with what we assume will be a sustained Orlando attack. I don't know why it is that I feel the same place about this series following the watching of all those missed shots, and Indiana's collapse down the stretch, but I remain unmoved.

On paper (there I go again) Roy Hibbert's nine blocks seem like a statistical aberration as well, but if Glen Davis continues to attack the rim as he did in Game 1, those things will continue to pile up, and Davis' jumper (which he relied on more and more down the stretch, for obvious reasons) comes and goes. It's a cop-out point because of Howard's absence, but Hibbert could be fantastic in this series; especially if the referees start to call Davis for putting two hands on his back while he posts up. Davis did well to counter Hibbert's post-ups with his, erm, low center of gravity on Saturday.

Orlando had its looks, too, to put this away. Hedo Turkoglu missed a series of Hedo-shots that I actually wasn't all that upset with. It's not typical for Ryan Anderson to score just five points on seven shots, and it's possible that the Magic learn to never, ever pass to Earl Clark again.

It's very possible that this could turn into a great series full of close games worked by tough players who are under the tutelage of very, very good coaches. It could still go five games, but each contest could be a nail-biter. We're OK with that.

All we can ask is for a few more made shots. 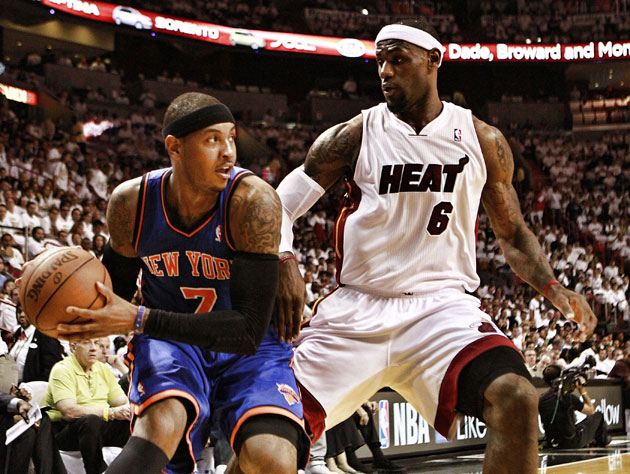 It was startling, but not unsurprising to see the Miami Heat absolutely dominate the Knicks in this win. Unsurprising because this is typically what the better teams do, and it hasn't changed my take that the Knicks can take two of the three games between contests 3, 4, or 5 in this series. Startling because the Heat's LeBron James is just an absolute marvel on both ends. Even though his game has been hyped beyond belief since entering the NBA eight and a half years ago, he's still a jaw-dropping basketball phenomenon when the lanes are open, and James is engaged.

New York's defense wasn't up to its typical snuff on Saturday, but James still had to overcome quite a bit on those rolls to the basket. On the other end, the Heat's defense made New York's offense look thin and ineffective in comparison. They were just everywhere, on both ends, as they should be. Startling, but not unsurprising.

That's a Game 1, though, in your building. A building that, for once, seemed to be full of people (people in the front row that LeBron James gave free shoes to, for some reason, as if those who buy front row seats for playoff basketball games in Miami should be getting all the free swag). Apologies for pushing forward after such a fantastic showing by the Heat, but these aren't the games that count — even in this series.

It's when it's tough, that it really counts, and attitudes shift. It's when the Knicks hit crazy shots, too, and any team with J.R. Smith on it will hit some crazy shots. It's closing games. It's coming back from a 12-point lead on the road. It's playing the comeback winner, instead of the martyr.

The rest of the nonsense doesn't interest me. Tyson Chandler, clearly at half strength (seven turnovers, no points), managed enough muscle to knock LeBron James on his tail with a first half screen, but you'd fall just same if you ran into a wall like that without knowing it was there. And Tyson's hit was more than legal — I don't understand the mawkishness handed to either Chandler's hit, or LeBron's reaction. The refs gave in to a bit of Miami flopping, but the Heat more than earned the benefit of the doubt. And they've earned the discredit of our doubt based on the team's finish to last season. Yes, those wins over the Sixers, Celtics and Bulls were impressive; but the onus is still on them to sustain this passion.

I don't think they fall in Game 2. The Knicks will play better on Monday, though I doubt it will be enough.

It's OK to let Derrick Rose's injury overshadow this game. It is the story. Though the intensity was ramped up and Rose looked more aggressive in this game than he had been in most of his deliberately-safe April outings, this could have been a regular season game; mainly because of Chicago's oft-heralded playoff-style effort that they come through with during otherwise anonymous regular season contests.

It's odd that so much in this game just didn't stick out with me. Rip Hamilton continued to aid in Chicago's much improved spacing, not so much because he is counted on by defenses to hit the sort of shots that Keith Bogans could not last season (though even that is up for debate, because Bogans was averagely accurate from long range last year, Rip wasn't a huge improvement at 37 percent) but because Hamilton continues to be underrated in creating off the dribble, and making the extra pass. As a result, Chicago's offense flowed throughout, and Philadelphia had no luck following both Hamilton (19 points on just seven shots) and Kyle Korver (5-8 from the floor) off of curls.

Philly's consistency was Philadelphia-styled consistent inconsistency. The team just couldn't hold off the Chicago runs, and often seemed out of sorts offensively. Too often the team had to rely on put backs and broken plays (with Thaddeus Young's left hand bailing them out a few times) to keep up. The team did make a run late, which is why Rose was on the floor with his team up 12 and 81 seconds left in the contest.

None of this matters, of course. This is a brand new series, with brand new motivations, and the only thing that carries over is the fact that Chicago lost its best player, and that the Bulls have a 1-0 lead in a best of seven turn.

Nothing else is of any permanence.