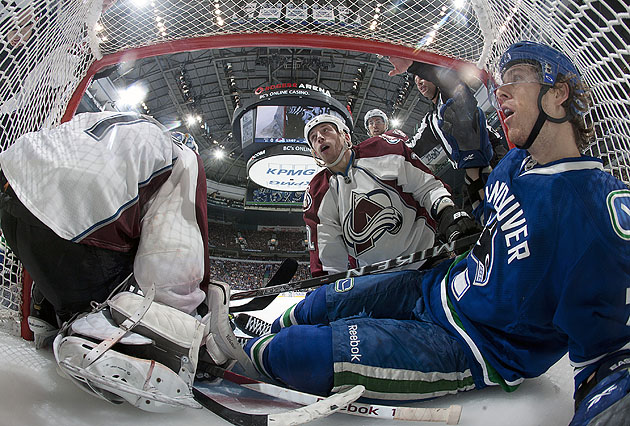 Well this is a good problem to have. After sitting the red-hot Roberto Luongo, Schneider stepped in and made 43 saves in a 1-0 victory over the Colorado Avalanche. Chris Higgins' shorthanded breakaway goal was the only tally. Schneider is 11-1-1 since Christmas.

Michael Ryder has 35 goals. No, seriously. The Stars free-agent acquisition tallied twice in their 3-1 victory over the Edmonton Oilers, propelling Dallas back into the Pacific Division lead. Mike Ribeiro had the primary assist on Ryder's first and third period goals; Ryder had a secondary helper on Ribeiro's second period goal. Kari Lehtonen made 31 saves for the win.

The Kings' netminder set a new franchise record for shutouts in a season with nine, as Los Angeles blanked the Calgary Flames, 3-0. Willie Mitchell, Dustin Brown and Justin Williams scored for the Kings. Quick had shared the record with Rogie Vachon, who set it in 1976-77. Anze Kopitar had two assists.

Honorable mention: Allen York made 29 saves for this first NHL victory, as the Columbus Blue Jackets defeated the Detroit Red Wings, 4-2. R.J Umberger had a goal and an assist; Nikita Nikitin had two helpers. Jack Johnson set a franchise record with 32:16 TOI. … Pavel Datsyuk had two assists. … The New York Rangers rallied from a 2-0 deficit to top the Winnipeg Jets, 4-2, taking a 5-point lead over the Penguins for the East's top seed. Michael Del Zotto and Ryan Callahan each had a goal and an assist. … Teemu Selanne's third-period goal was the difference as the Anaheim Ducks knocked the San Jose Sharks out of the division lead with a 3-1 win. The Ducks won five of six meetings with the Sharks. Bobby Ryan and Corey Perry had the other goals. Jonas Hiller made 28 saves.

Dishonorable mention: Jarome Iginla was a minus-2 and didn't register a shot on goal. … Ryan Jones was a minus-3. … Colorado was 0-5 on the power play. … The Ducks were awarded an empty net goal on a Corey Perry shot that went off the side of the net as Dan Boyle slid into the goalpost to dislodge it. Here's how the NHL explained it.