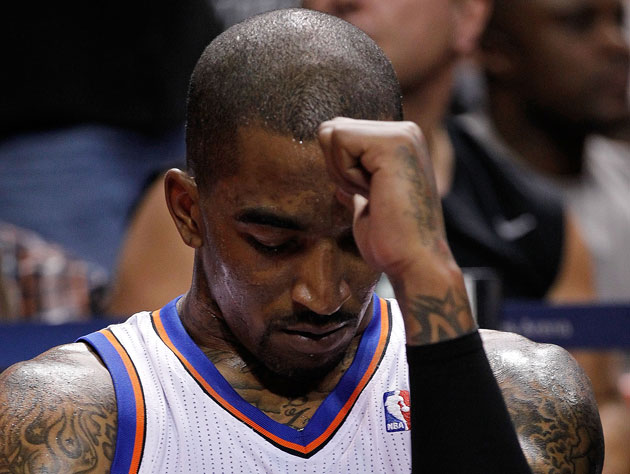 Since the advent of the internet, the very public worldwide forum has allowed otherwise normal (or, whatever you want to call New York Knicks guard J.R. Smith) people to do stupid things. The addition of cell phones that can take pictures that can immediately hit the internet only accelerated that level of stupidity. Smith wasn't exactly being incredibly stupid when he posted a picture of his girlfriend's large posterior while making a joke about how it was getting in the way of him watching a basketball game on Thursday night. He should have known better, considering his stature of a semi-celebrity, but it wasn't the worst thing he could do.

The NBA disagrees, though. And they've decided to fine Smith $25,000 for his since-deleted NSFW Twitpic of model Tahiry Jose. And though we question Smith's line of thinking as he lined up his girlfriend for a pose she didn't know she was making, we're also not sure as to what jurisdiction the NBA has in fining the oft-disciplined Knicks guard.

Though it was a bonehead move to post the picture to his 75,000 Twitter followers, this is his personal Twitter account, and not one affiliated with the NBA (a league he didn't join until a month ago for the 2011-12 season, as Smith worked a fitful year in the Chinese Basketball Association). Freedom of speech doesn't mean Smith should be allowed freedom from criticism for his dumb "look at my girlfriend's butt"-brand of "speech," but how can the NBA point to some moral turpitude clause in this scenario while fining a player for making a joke that was more silly than lascivious?

I'm not going to pretend to know the full ins and outs of what most NBA players do with their Twitter accounts. Even though it's my job to cover this league, I only follow a few NBA players on Twitter, and don't usually keep up with what I'm sure are a series of daily goofball Twitter pictures and videos as these guys shuffle across North America, smartphones in hand.

Smith expressed regret on Friday night following the initial (and, compared to what's going to come down, quite slim) uproar over his picture, telling this to assembled New York NBA scribes:

"I didn't know it would turn into a big deal,'' Smith said of the photo. "I definitely regret it. Whenever it takes away from our team, I regret it. It wasn't the smartest move."

Shouldn't that be enough? And what sort of statement is the NBA attempting to start here? Don't make bad jokes about your girlfriend's butt being in the way of the TV, because you might eventually show (shock horror!) boobies and naughty parts on your Twitter account if we don't get in the way, now?

Can't the criticism and held noses be enough? If some active NBA player wants to start some disgusting career as a Joe Francis or Terry Richardson-type, and publish his pictures of barely-clothed woman in some form of media, does the league have the right under some moral turpitude clause to fine these guys? Even if the end result of some pictorial puts us off more than it turns anyone on, what role does the NBA play enforcing its own take on morality when it comes to people doing stupid things on the internet that aren't breaking any laws?

This isn't to dismiss how lame Smith's picture was, but the amount of criticism and "seriously, guy?" Twitter responses should be enough.

The NBA doesn't need to make this a bigger story (and it will become a bigger story; thanks NBA!) by laying down a fine. If the NBA wants to crack down on something, why not get in touch with the dozens of NBA players that have online Twitter conversations with adult actresses and dancers, whose Twitter pages either feature links to their NSFW sites, or their own lineup of Twitpics that are far racier than what Smith posted. For the impressionable 10-year old that the NBA was thinking of when it took the hammer to J.R., these sorts of entryways are far easier to access than a long-since deleted picture from Smith.

It's the NBA, though. Selective overreaction is often the only order of the day. Inconsistency that only J.R. Smith's shooting percentages and attitude level could hope to match.

You both don't know better, at this point?