Back by popular demand, here are your Puck Previews: Spotlighting the key games in NHL action, news and views as well as general frivolity. Make sure to stop back here for the nightly Three Stars when the games are finished. 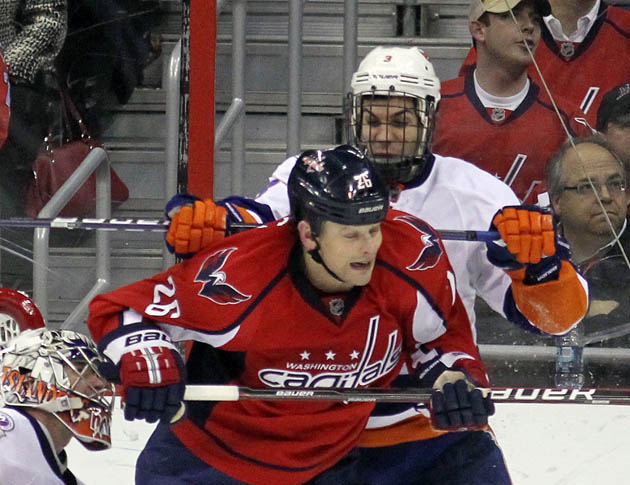 Is this photo as scary to everyone else as it is to me?

Don't look now, but the Bruins are only one point up on the Ottawa Senators for 1st place in the Northeast Division. (I say 'Don't look now' because the shock of this statement is mitigated when you notice they have four games in hand. But I digress.) The Bruins struggled in February, losing 8 times in 13 games and getting shut out in 5 of those losses. If March is similar, the Senators will really be nipping at their heels. But the Devils could be good for starting the month off right: Boston's won all three meetings this season. Plus Greg Zanon makes his debut! How can you not be excited for that? Greg Zanon!

Follow the numbers: The Panthers have won 3 straight 4 times this season, but it's been nearly 4 years since they've won 4 straight. And speaking of fours, they have 4 points on the Winnipeg Jets in the Southeast, and 3 on the Washington Capitals. Furthermore, this is their game in hand on the Capitals: a win puts them 5 clear of the Caps and 6 clear of the Jets. But the Jets know this too. A win muddles the picture in the Southeast considerably, putting Winnipieg into 8th in the East and only two behind Florida. It's a big game. The Panthers will be without Kris Versteeg, who has 8 points in the last 3 games between the teams.

Just two weeks ago, the Canucks steeled themselves for a battle with the Central Division-leading Detroit Red Wings for first place in the West. Thursday night they do the same against the St. Louis Blues. They're 6-0-1 in their last seven at Rogers Arena, while the Blues are a mediocre 14-13-3 on the road.

• Milan Lucic on taking fighting out of Canadian junior hockey: "I'm totally against it. I think there will be more injuries because there'd be no fear of fighting. The game will become dirtier. And, for myself, I don't think I could have made the NHL the way I did without it." [Sportsnet]

• Odd story on an ice rink in New Hampshire that got 31 people sick with nitrogen dioxide poisoning. [KUHF]

• Nicklas Lidstrom's been diagnosed with a deep bone bruise and will miss the weekend's games and be re-evaluated Monday. [Detroit Free Press]

Bold prediction: David Clarkson attempts a leaping hit on Brad Marchand, but Marchand low-bridges him and the two miss each other entirely.