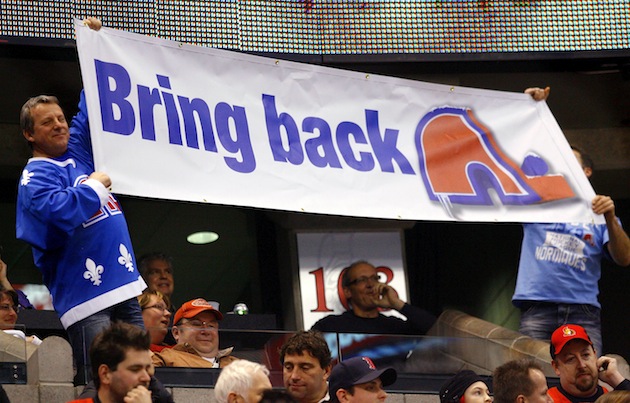 The realization of the NHL coming back to Quebec City took a big step forward on Sunday when Mayor Regis Labeaume announced plans for a $400 million, 18,000-seat arena that will begin construction in September and be ready by September 2015. Labeaume said the arena would be comparable to that of CONSOL Energy Center in Pittsburgh.

Also in attendance was Pierre-Karl Peladeau, president and CEO of media conglomerate Quebecor who has expressed interest in buying an NHL team should one come available. Quebecor was also granted naming rights to the soon-to-be built arena and will manage the facility.

From the Journal de Quebec (via Google translation):

Peladeau has also insisted that Quebec will certainly not be ashamed when it compare to other cities with modern lecture theaters. "There is no doubt, in September 2015 we will inaugurate a modern multifunctional amphitheater, comparable to what is best in North America. From day one, it will be a source of great pride for the citizens of Quebec and all Quebecers. The stage of no return is crossed," he said.

Labeaume told those in attendance at the press conference he wouldn't be answering any questions related to a future NHL tenant in the building. That's in following the True North Sports and Entertainment route of doing your due diligence and keeping quiet until the NHL says the team is yours.

RDS's Renaud Lavoie tweeted that the NHL would not comment on the arena news.

In March, Labeaume said that millions of dollars in upgrades would be completed this summer to Le Colisee, the former home of the Nordiques; so should the Phoenix Coyotes -- or any other NHL team given the sharp left turn that happened a year ago -- have to be relocated this summer, a temporary home in Quebec would be available for the next three years while the new arena is being built.