Late Eight: Liriano one of many afterthoughts poised to profit

by Brad Evans in General 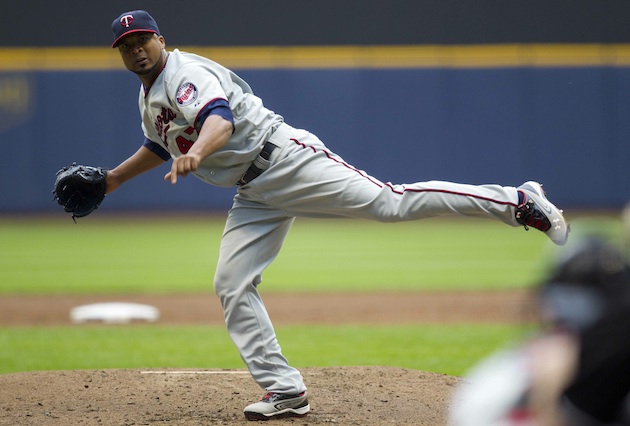 Every year in the deep recesses of drafts, an overlooked leviathan, or three, emerges from the darkness to carry owners to the Promised Land. Last year, Michael Morse, Ian Kennedy and Michael Pineda fit the definition. This season isn't lacking in similar candidates. Below are eight true Rip Van Winkles that could catapult your fantasy baseball team to great heights in 2012:

Francisco Liriano, Min, SP
Y! ADP (12-team round): 243.8
Y! AAV ($260 budget): $1.7
For owners who paid an exorbitant price a season ago, Fransucko awarded them with a giant, smelly pile of insufferable numbers. His five-plus ERA and blue whale-sized WHIP cost many Liriano loyalists plenty of roto points.  Appropriately, his stock plummeted. However, the southpaw appears to have rediscovered his mojo this spring. Over the past few weeks, Twins management has toyed with his mechanics and emphasized efficiency in order to work its once prized ace later into games. So far, so damn good. Healthy again and brimming with confidence, Liriano's slider looks restored, again mystifying batters  like it did when he whiffed 201 two years ago. Through 22 Grapefruit innings, he's struck out 26 while walking a mere four. If he can carry over that success into the regular season, he's a shoo-in for Comeback Player of the Year, and a mighty fine SP3 diamond-in-the-rough in mixers. Adios Mr. Hyde.
Fearless Forecast: 181.1 IP, 13 W, 3.87 ERA, 1.31 WHIP, 198 K

Mike Minor, Atl, SP
Y! ADP: 259.0
Y! AAV: $1.1
The once prized prospect gave the Braves an ultimatum this spring: Start me or trade me. Nearly unblemished through 18.2 Grapefruit innings (two earned runs), the lefty isn't packing his bags anytime soon. Fredi Gonzalez recently remarked he can "throw almost any pitch at any time now." Expect him to build on his career numbers. Over 123.1 career innings, Minor has occasionally shown brilliant flashes. But sporadic bouts of wildness, a touch of gopheritis and plain old bad luck (.359 career BABIP, 3.63 xFIP, 24.1 LD%) hindered his fantasy potential. Still with a K/9 above 8.0 and what appears to be a locked in spot in the rotation, he definitely possesses plenty of upside. With Tim Hudson slated to return sometime in late-April/early-May, the 24-year-old will need to come out of the gates with guns ablazin'. Based on his stellar spring and determined attitude, don't expect him to relinquish his spot in the rotation anytime soon.
Fearless Forecast: 168.0 IP, 11 W, 3.79 ERA, 1.29 WHIP, 163 K

Sean Marshall, Cin, RP
Y! ADP: 212.5
Y! AAV: $2.8
Last year, the former North Sider was an ideal ERA/WHIP tourniquet. Over 75.2 innings, he amassed a 2.26 ERA, 9.40 K/9, six wins, five saves and remarkable 2.35 GB/FB ratio. Now the beneficiary of Ryan Madson's downfall, he could emerge one of the finest closers in the National League. If Aroldis Chapman is a flashy Porsche, Marshall is a Hyundai — consistent, reliable and, in fantasy terms, very affordable. Though the Cuban import has made noticeable strides this spring, the latter is the clear frontrunner to shut the door, despite Dusty Baker's recent hints at installing a BPBC. His experience in pressure-packed situations scores major points in the skipper's mind. If Marshall blossoms in his new role, it's conceivable the lanky lefty could become this year's J.J. Putz, a passed over closer that could flirt with a saves title. Keep in mind entering the season, the Reds are the projected class of the NL Central. Consider him reason No. 1,349 why you should never overpay for saves.
Fearless Forecast: 72.2 IP, 4 W, 2.68 ERA, 1.11 WHIP, 68 K, 38 S 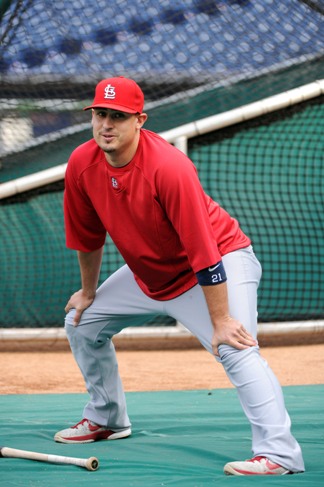 Allen Craig, StL, 2B/OF
Y! ADP: 233.1
Y! AAV: $1.6
When Cards camp opened in Florida in mid-February, Craig, only a couple months removed from knee surgery, was considered a long shot to open the season on the team. Jose Canseco has better odds of accurately predicting Al Gore's untimely death. But shockingly it appears the outfielder will head north with the team. His knee has responded positively to light workouts while his bat has tore through Grapefruit pitching. Running remains a chore for Craig, but Mike Matheny hopes to deploy him in pinch-hitting situations until he can play the field without inhibition, which is likely another month away. Though still mending, he's a bench commodity worth stashing. He tallied a .315-11-40-33 mark over just 200 at-bats last year. His position flexibility is also a major plus, particularly in leagues that require a MI. Once healthy, he should see regular PT in right with Carlos Beltran shifting over to center.
Fearless Forecast: 476 at-bats, .297 BA, 24 HR, 81 RBI, 69 R, 3 SB

Lucas Duda, NYM, 1B/OF
Y! ADP: 215.6
Y! AAV: $2.0
White Russians will soon be all the rage in Queens. "The Dude" is primed for a breakthrough campaign. Recall during the second-half last year, he launched a homer once every 20.5 at-bats and totaled a .311/.411/.957 over 205 at-bats. His subsequent fantasy value was the 26th-best among outfielders during that span according to Baseball Monster. Weighing his solid contact profile, .286 MiLB career average, Citi Field's hitter-friendly makeover, projected every day gig in right and likely fifth spot in the order, Duda should reward the frugal. Southpaws may vex him at times (22.5 K% vs. LHP in '11), but he is a hard swinger who one scout said possesses "some serious power." Throw in his position flexibility, and he's quite the useful end-game commodity. Wear a milk moustache.
Fearless Forecast: 522 at-bats, .278 BA, 26 HR, 88 RBI, 76 R, 2 SB

Delmon Young, Det, OF
Y! ADP: 227.7
Y! AAV: $1.6
Next to teammate Ryan Raburn and Royals riser Eric Hosmer, the former No. 1 overall pick has made the most noise of any offensive player this spring. "Feeding" off Prince Fielder (And there's plenty to share), Young has swung the stick with renewed confidence and heightened vigor. He's second among spring hitters in RBI with 19. Still just 26 and only a season removed from a top-30 campaign with the Twins, he has yet to reach his career nadir. After a disastrous 2011, this could be the year he not only rebounds, but resets the bar. Batting fifth behind Miguel Cabrera and Prince should provide him with better pitches and ample run-driving opportunities. If he can jump on fastballs earlier in counts, he could establish new career benchmarks in several categories. Give him another chance.
Fearless Forecast: 542 at-bats, .282 BA, 20 HR, 97 RBI, 78 R, 4 SB

Chris Parmelee, Min, 1B/OF
Y! ADP: 270+
Y! AAV: $1
Meet this year's most underrated candidate for AL Rookie of the Year. To say Parmelee has had a tremendous spring would be an understatement. A few weeks ago, it appeared the 24-year-old was destined for Triple-A, but swinging a red-hot bat he's forced management to strongly reconsider their position. Gardenhire and GM Terry Ryan are already toying with ideas to get the lefty into the lineup on a regular basis. At this point, it appears he's a near lock to trot out to first base or right field opening day. He's clearly Plan B if Justin Morneau's career officially flatlines. If Parm continues to hit, he should become a fixture in the lineup. Recall he raked a .355-4-14-8 line over 76 late-season at-bats with the senior club last year. His power is still in development, but he's a terrific contact hitter capable of useful totals in BA and RBI. Go the extra buck, deep leaguers.
Fearless Forecast: 491 at-bats, .289 BA, 14 HR, 72 RBI, 59 R, 3 SB

Adam Dunn, ChW, 1B
Y! ADP: 242.3
Y! AAV: $2.0
Just six months ago, Dunn's season ended much the way it began, with a calamitous thud. Last year, the Human Hurricane uprooted trees, displaced cars and drained the souls of his fantasy investors. His final line (.159-11-42-36) was painful to say the least. An emergency appendectomy at the start of the season sparked a dramatic increase in strikeouts and unplugged his power. For the slugger, it was the first time since his rookie year (2001) he failed to register at least 25 homers in a season. Determined to reverse the curse, the 32-year-old came to camp with an open-mind and thick beard. Thus far, the Bruce Sutter has paid off. In 39 Cactus at-bats, he's smacked four homers and notched a 4:13 K:BB split. If his eagle eye heads north, he could undergo a major resurgence. The Cell is one of baseball's finest offensive parks. Still in his prime years, Dunn is far from done.
Fearless Forecast: 501 at-bats, .238 BA, 31 HR, 90 RBI, 79 R, 1 SB

AN ADDITIONAL SIX-PACK OF SLEEPERS …

Mike Aviles, Bos, 2B/SS/3B (235.1, $1.9) — Raking this spring, versatile veteran appears locked in as the SAWKS' starting shortstop to begin the season. He will bat down in the order, but possesses measurable BA upside and could chip in low double-digits in homers/steals.

Greg Holland, KC, RP (228.5, $1.3)— Deadly combination of heat (mid-90s fastball) and deceit (filthy slider), the righty has the goods to excel in high-leverage situations. In 78.2 MLB innings, he's punched out 11.10 per nine. Bank on him asserting control over Jonathan Broxton/Aaron Crow no later than June 1.

Lorenzo Cain, KC, OF (256.0, $1.4) — Speedster has opened eyes this spring, showcasing surprising pop and an excellent glove. Jason Bourgeois is lurking in the shadows, but with a torrid start he will lock down regular at-bats. Label him a dark-horse 15-30 candidate.

Tyler Greene, StL, 2B/SS/OF (270+, $1) — The versatile infielder has the upper-hand over Daniel Descalco for the starting second base job. More importantly, with Matheny's concerns about Rafael Furcal's bat growing, it's very possible the deep sleeper will start the season in the Cards' catbird seat. Greene has always possessed 15-25 potential, but was only an afterthought under Tony LaRussa. At 28, he's in great shape to bust out.