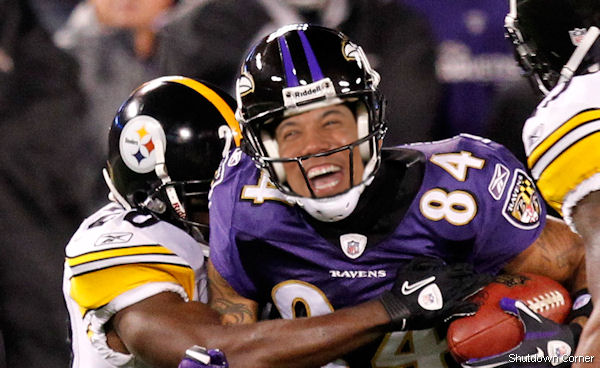 Hines Ward, the hard-blocking anchor of the Pittsburgh Steelers wide receivers corps for much of the last decade, was in the news over the weekend. Not much of it was pleasant for Ward.

A couple of reports surfaced indicating that Ward wasn't likely to return to the Steelers. Scott Brown of the Pittsburgh Tribune-Review told ESPN that he didn't believe Ward would be back with the Steelers, and the NFL Network's Jason La Canfora said his sources believe that Ward won't be back.

On Saturday, Hines took to Facebook to make his case for staying.

I don't normally like to respond to rumors, but as I've said all along, I want to finish my career with the Pittsburgh Steelers. And as I've already told the organization, I am willing to work with them to restructure my contract to make sure this happens.
- HINES

Steelers sources told Ed Bouchette of the Pittsburgh Post-Gazette that no decision at all had been made on Ward, but of course, that's what they would say. At any rate, the best-case scenario for Ward right now is that his status with the Steelers is up in the air, which leaves open the possibility that Hines Ward could be in a different uniform in 2012.

And that would be weird. Imagine Ward playing for, say … the Baltimore Ravens.

The problem with keeping Ward is that, with the Steelers, he's now clearly their fourth receiver. Even if he's willing to restructure his contract down to the league minimum, teams generally don't carry fourth receivers that don't play special teams. Ward, a four-time Pro Bowler and at the age of 35, might not be thrilled with special teams duty.

Then again, he is Hines Ward. He enjoys smashing people in the face like a normal person enjoys an ice cream sundae. When he was a child, and he brought home a good report card, his parents rewarded him by giving him permission to hit a neighbor kid in the mouth with a forearm shiver (Note: There is no truth to that).

Maybe he'd willingly play special teams. Maybe he'd be a great long-snapper. Still, it would force the Steelers to make a sacrifice, because the position of fourth receiver is also developmental ‒ you want a guy there who you can hopefully one day turn into a starter. Ward's days of starting are behind him.

Ward says he's going to play in 2012, whether it be with the Steelers or elsewhere. I don't imagine there'd be much of a problem finding a position elsewhere, as few teams have three quality young receivers like Mike Wallace, Emmanuel Sanders and Antonio Brown.

And there are teams out there which always seem to need receiver depth. One of them happens to also be in the AFC North, and they wear purple.