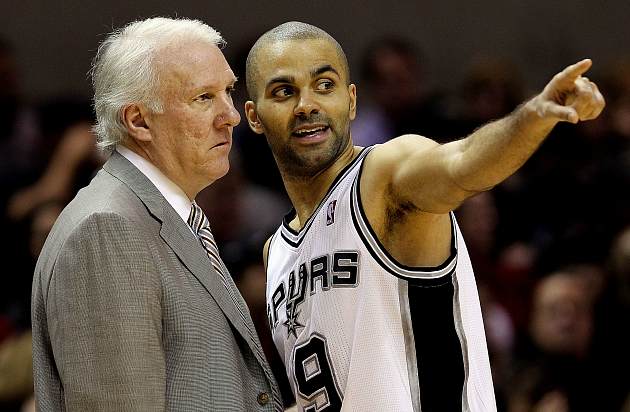 Every season, the San Antonio Stock Show & Rodeo forces the hometown Spurs out of their environs for one of the longest road trips of the NBA season. Typically, it runs at least two weeks and covers many thousands of miles. In fact, this year's trip, which begins Monday night in Memphis and ends Feb. 23 in Denver, covers nine games and 7,941 miles, long enough to tie the biggest jaunt in franchise history.

It's a tough situation for the Spurs, but their veterans have experienced it enough times to have developed coping mechanisms. Point guard Tony Parker, especially, seems to have the right idea. From Jeff McDonald for the San Antonio Express-News (via James Herbert):

The secret to sanity, it turns out, begins with sticking close to coach Gregg Popovich.

"Just go to nice restaurants with Pop and get tipsy sometimes," Parker joked. "That's the secret. Drink a lot of wine. It goes faster."

Parker is French, so it shouldn't come as much surprise that likes to have a little wine with his dinners. On the other hand, we typically think of NBA players — particularly vets like Parker — sticking to a strict diet with little room for indulgence. The idea of Popovich and his players getting a little tipsy at dinner seems bizarre for a group usually associated with no-frills professionalism.

What this statement suggests, apart from the Spurs' mythic capacity for dry humor, is that they've relied on staying loose and comfortable with each other more than you'd think. It's not all serious business for them. Sometimes, they're going to spend a road trip having fun. Maybe that's the only way to stay sane.