The Phoenix Coyotes continue to complicate everything by winning 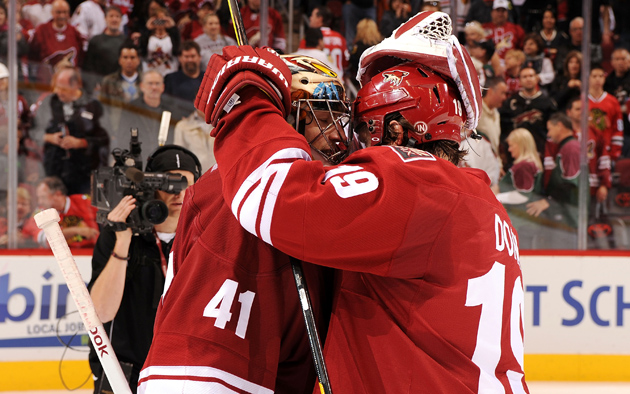 The Phoenix Coyotes became the 8th consecutive team to defeat the Chicago Blackhawks Saturday, so one could understand why most of the chatter following that game was surprise over Chicago's continuing struggles.

In fact, the Hawks' 8-game losing streak may not have been the most surprising run to come out of that game: for the Coyotes, the win was their 5th in a row, a streak that has included victories over the Detroit Red Wings and San Jose Sharks, vaulting the team into 8th place in the Western Conference.

Frankly, for anyone expecting big action at the trade deadline, this recent win streak is just a huge disappointment. The Coyotes' ownership struggles and vast array of expiring contracts could make them the central hub for deadline deals. Heck, when you type "Phoenix C" into Google, the first suggestion is "Phoenix Craigslist."

But there will be no fire sale in Phoenix if this team continues to play spectacular hockey.

One look at the Coyotes lineup should tell you that this group isn't supposed to be postseason-bound -- it's supposed to be sold off, piece by piece, to the teams that are.

Much of the Coyotes' core (Shane Doan, Daymond Langkow, Ray Whitney, Adrian Aucoin, Taylor Pyatt, and Michael Roszival) is headed for unrestricted free agency at the end of this season, and while none of these guys scream "massive impact", each of those guys would be a nice addition to a playoff team.

Shane Doan especially could command a pretty penny at the month's end, and the ownership situation has increased the likelihood that he'll reach July 1 without a contract. From the Winnipeg Free Press:

"Obviously, I'd be pretty naive to not think that way," Doan said in a recent interview. "At the same time, everything is kind of focused on waiting to see how our team's doing and what we're doing and what's going on with the ownership and different things. (I'll) make a decision then I guess.

"But yeah, I'd be stupid not to be looking at (my options) and thinking about everything else."

But Doan controls everything. He may be a free agent in July, but he can also dictate where and if he goes right now. His contract has a no-movement clause, and he's gone on record many times as saying that he'd rather stay.

If the Coyotes are playoff-bound, he's not going anywhere -- especially if Phoenix has a chance to play first-round spoiler versus, say, a Detroit Red Wings team that swept them in the first-round last year, devastating a fanbase that thought they were watching the swansong of the franchise in Arizona.

Whitney, too, could be a major addition to a contending team's forward corps. Did you know he's the Coyotes' leading scorer, with 51 points in 56 games? Whitney is 3 months shy of 40, and he has more points than Teemu Selanne despite playing on a more defensive-minded team with less help. He's 18th in the NHL in scoring and 7th among Western Conference forwards. But no one's talking about him, and he won't even be available if he continues to keep the Coyotes in the playoff hunt. 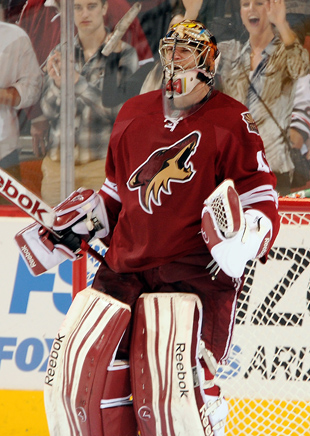 And remember when it was said that Phoenix was desperate for a goalie, that their best assets could be had for an NHL-ready netminding prospect? That was right around the time the Coyotes were letting Mike Smith and Jason LaBarbera compete for the starting job, a plan that seemed like a hilariously sad joke.

Smith has actually improved on the goaltending Phoenix was getting with Ilya Bryzgalov last season. Bryzgalov posted a GAA of 2.48 and a save percentage of .921 in 2010-11. This year, Smith has given the Coyotes a 2.33 GAA and a .925 save percentage.

This week, he posted more wins than goals allowed, going 4-0-0 with a 0.74 GAA and a .975 save percentage. (You know who could use a goaltender with numbers like that? The Philadelphia Flyers.)

Smith looks poised to drag the Coyotes into their third consecutive postseason, a prospect that should excite anyone hoping for the most boring trade deadline ever.