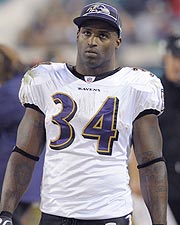 Ricky Williams is retiring from the NFL. Again. This time, however, it appears to be for good. The 34-year-old Williams told the Baltimore Ravens on Tuesday he won't be back to fulfill the second year of a contract he signed in August. Playing as a backup to Ray Rice this year, Williams ran for 444 yards and scored two touchdowns.