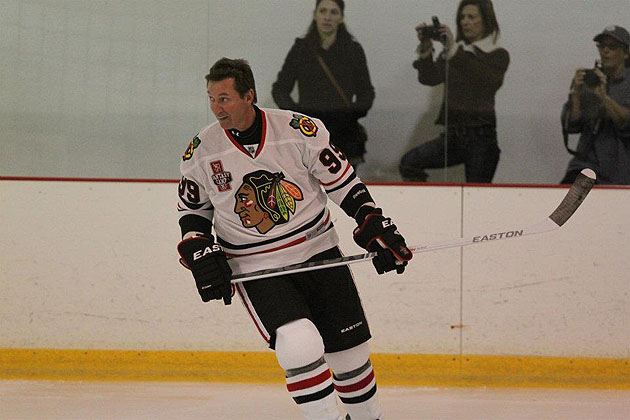 • We've seen this photo a few times, and it simply can't be ignored any longer: Here's Wayne Gretzky, committing to the Indian during his fantasy camp last week. #blasphemy [Gretzky, s/t Scotty Wazz]

• Some discouraging news from Chris Botta for New York Islanders fans: "Wang does not want to leave Nassau County, and staying put remains his first choice. But when I asked top executives to confirm that Wang will only consider overtures from municipalities within the New York metropolitan area, I could not get a promise on or off the record." [NYI Point Blank]

• Mike Knuble on the Washington Capitals making him a healthy scratch: "It sucks." [WJLA]

• Mikael Backlund is expected to miss 4-6 weeks for the Calgary Flames. Welcome to the center spot, Mike Cammalleri. [Flames]

• Awesome: The University of Nebraska at Omaha will play an outdoor hockey game at TD Ameritrade Park next season, probably against North Dakota. [Omaha.com]

• Why the trade deadline might be a trade DUD-line this year. (See what we did there?) [Red Light District]

• Why Seattle deserves its moment: "If it isn't next year, if it's not for three, keep this city in mind. When the time does come for an NHL club to relocate, take a hard look at Seattle, take a good look at Seattle — and realize it's an option that deserves a chance over Canada." [View From My Seats]

• Drew Magary on why the Stanley Cup is the greatest of all sports trophies: "So iconic, it's not even close. It's presented to you by men wearing white debutante gloves. It has your name engraved on it. And best of all, it's a cup. All trophies should be cups. People have gotten drunk out of the Stanley Cup. They've eaten out of it. They've shat in it. They've fed horses out of it. The Cup has had a richer, fuller life than you ever will." [GQ]

• Cal Clutterbuck is day to day for the Minnesota Wild with a lower body injury. [Russo]

• The Pensblog explains the awesomeness of the James Neal, Chris Kunitz and Evgeni Malkin trio: "If Crosby comes back this season, there is almost no chance, in our opinion, that he gets reunited with Kunitz." [Pensblog 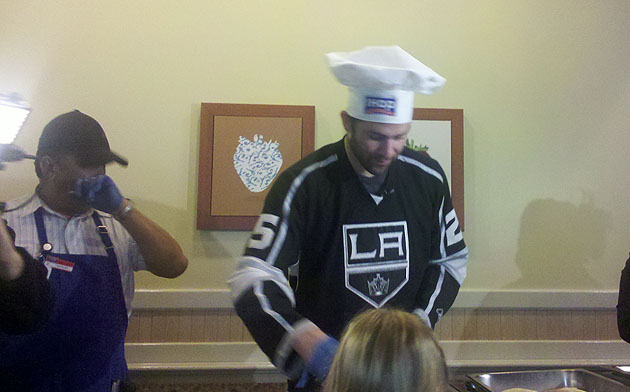 • Via reader Mike Gonzalez, at IHOP for the Pancakes With Dustin Penner event: "There was a good turn out for the charity event. Penner was in good spirits and amazingly the local media even turned out for a hockey event. Just thought I'd share a picture with you guys." More from the Globe & Mail.

• On the plight of the Los Angeles Kings: "I am sure it seems obvious to Dean Lombardi, Coach Sutter, and even the gravel-voiced concession guy hawking cotton candy while ruining the hearing in my left ear. The point is, those guys are paid to fix it, (except the concession guy, he gets a pass but I am not paying for any of his sticky crap). Lombardi and Sutter have declared an awareness of the problem, and yet the team is going backwards and the numbers are dropping." [Surly and Scribe]

• Andy Sutton gets a 1-year extension from the Edmonton Oilers. [Journal]

• Jonathan Willis takes a critical look at GM Steve Tambellini's comments about the direction of the team. [Oilers Nation]

• David Staples on Alex Hemsky's future: "The sanest course of action is to offer Hemsky a short-term deal, one or two years, three at most, for an inflated amount, as the cap concerns and pressures should only become truly pressing as the team improves down the road." [Cult of Hockey]

• Dellow on Hemsky: "Jordan Eberle's a pretty good prospect having an outstanding season. He isn't as good as he's looked this year. Ales Hemsky isn't as bad as he's looked. Getting rid of Hemsky, when he's putting up better chance numbers despite playing more difficult minutes than Eberle strikes me as insane. Eberle's due to cool off anyway. When Hemsky goes — and he seems obviously gone — it's just going to get tougher for him. The Oilers are going to be further away from contending for a playoff berth." [mchockey79]

• The Fox over at Gongshow writes about the plight of hockey players when the games are over. [The Fox's Tail]