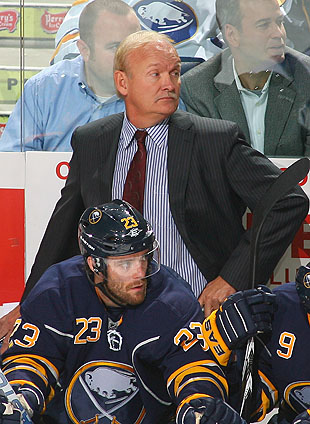 According to the Internet Hockey Database, James Patrick has never been a head coach, spending six years under Buffalo Sabres' bench boss Lindy Ruff as an assistant concentrating on defense.

So let's all revel in this crackpot conspiracy theory, shall we? Of course it was defenseman Jordan Leopold who "accidentally" slid into Ruff during practice on Monday, sending Ruff to the ice where he cracked three ribs.

How else would Patrick get his chance to be a head coach in Buffalo, if only for a night?

Preposterous theories aside, it'll be James Patrick, Kevyn Adams and Teppo Numminen running the show when the Buffalo Sabres host the Boston Bruins on Wednesday night.

According to Mike Harrington of the Buffalo News:

Patrick said Ruff is "hoping to be here" but it's certainly up in the air if the head coach if will be in the building tonight. Patrick said he could be in the press box or could simply stay in the coaches' suite in the locker room area and watch the game on the big-screen TV.

Patrick said it a little unusual to be calling forward lines but will try to keep things business as usual. "The helpful thing is there's a lot of veteran guys with Pommer [Jason Pominville] and Gaus [Paul Gaustad] and Derek Roy," Patrick said. "It's a pretty veteran lineup. And they communicate on the bench and I don't expect any problems.

Harrington reports that this is the first game Ruff's missed since March 20, 2006, when missed a game against the Atlanta Thrashers while attending a hospital visit with his daughter.

Hopefully Lindy can attend the game, if only for that moment when he starts launching drinks, food and chairs from the press box onto the ice when the Sabres go down 3-0 in the first ...