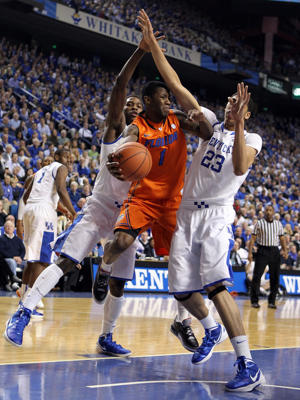 Syracuse has the stronger resume. Ohio State and North Carolina have more experience. Murray State is the lone unbeaten.

But there can be little doubt after top-ranked Kentucky obliterated No. 8 Florida 78-58 on Tuesday night that the Wildcats have entrenched themselves as the national title favorite.

If Tuesday's matchup with Florida was a litmus test for Kentucky after a month of beating up on second-tier SEC teams, then the Wildcats proved they're ready for a back-loaded second half of league play. They used their length and athleticism to smother a Gators team that had won seven in a row entering the game, building a 12-point halftime lead and never letting Florida back within single digits after the opening minute of the second half.

Whereas Florida could have tied Kentucky in the loss column with a victory at Rupp Arena, the Wildcats (24-1, 10-0) now have a 2.5 game lead on the Gators and a four-game cushion on Vanderbilt and Mississippi State. About all Kentucky has left to prove in SEC play is that it can defeat the league's better teams on the road, something the Wildcats will have the chance to do Saturday at Vanderbilt and later at Mississippi State and Florida.

What suggests Kentucky could win all those games is the intimidating defense it showcased once again Tuesday night.

Determined to prevent three-point happy Florida from getting any open perimeter looks, Kentucky crowded the Gators at the three-point line and dared them to take them off the dribble. It was a sound strategy since the Wildcats have the length on the perimeter to bother Florida's shooters and the nation's best shot blocker in Anthony Davis to alter shots around the rim.

Besides occasional flashes from guards Kenny Boynton and Bradley Beal, the Gators never looked comfortable against Kentucky. They sank just 35 percent of their shots from the field, hit just 6 of 27 from three-point range and had four shots blocked and numerous more altered by Davis' enormous wingspan.

Florida's inability to score consistently prevented it from utilizing full-court pressure, which was one of the few ways the Gators had any success. All the long rebounds from Florida's missed three-pointers also fueled the Wildcats' transition attack, contributing to Kentucky's 52.7 percent shooting.

Doron Lamb led Kentucky with 18 points and 4 of 5 three-point shooting. Michael Kidd-Gilchrist chipped in 13 points and 13 rebounds. But the biggest game-changer was Davis, who may have overtaken Kansas' Thomas Robinson in the national player of the year race by dominating with his defense while also scoring 16 points on an array of alley-oop dunks and pick-and-roll-generated layups.

When Kentucky coach John Calipari spoke to ESPN just after the final buzzer, he explained that a 20-point victory wasn't what pleased him most.

"Our thing is, 'Are we getting better?'" Calipari said "That's all I want to know."

Clearly, the answer is yes. For Kentucky fans longing for another national championship, that's great news. For the rest of college basketball, that's downright scary.