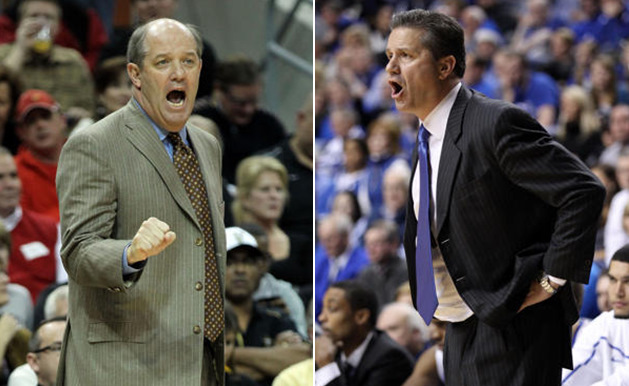 Apparently tired of Kevin Stallings complaining Kentucky received an easier schedule than its SEC peers, John Calipari took a jab at the Vanderbilt coach Tuesday night in advance of Saturday's matchup between the Wildcats and Commodores.

Stallings has grumbled about Kentucky getting more time to prepare than its opponents because it doesn't have any Thursday games for the second straight year yet it plays four Saturday matchups against teams who had only one day in between games. Calipari chose to playfully fire back after Tuesday's 78-58 win over Florida when a reporter asked him about preparing for the Gators' three-point attack.

"We only had one day obviously to prepare for it," Calipari said, flashing a Cheshire grin. "That's the problem with playing Saturday-Tuesday, you only have one day to prepare. It's awful. I mean, it's just ridiculous."

The reason Kentucky has fewer Thursday games than its conference peers is because its weekday games often are chosen for ESPN's weekly SEC showcase time slot on "Super Tuesday." By contrast Mississippi has three Thursday-Saturday turnarounds, most in the league.

"Go figure that one out for me, would you?" Stallings told the Nashville Tennesseean last month. "We all agreed to do it, so if you have one, like we have one, I'm not going to complain. To not have any and to be able to play four teams that have to do it to play you … that's not right."

Kentucky's schedule is certainly a slight advantage, but it comes across as a little whiny for Stallings to publicly complain. Furthermore, SEC teams actually have not fared that badly in the second half of the Thursday-Saturday turnaround so far this season, winning four of the nine games.

Ultimately, Kentucky's 2.5-game lead in the SEC has little to do with its schedule format. As the Wildcats showed against Florida on Tuesday night, they simply have better talent than any of their SEC peers.