Even for fans, Daytona’s 24 Hours is a fight to the finish 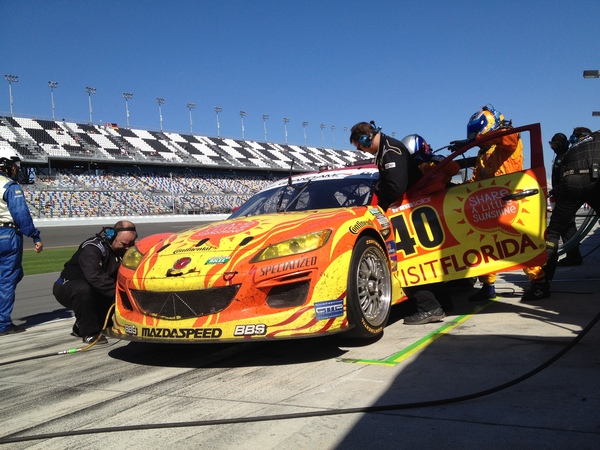 DAYTONA BEACH, Fla. -- I swiped my credit card at a McDonald's one and a half miles from the turn one tunnel sometime after 12:30 Sunday morning for an order that I hardly wanted to eat — a number one with extra pickles, an extra cheeseburger and a Dr. Pepper.

It was too much food — about 1,220 calories of gluttony plus ketchup — and inane for that time of the morning. But this trip to the Golden Arches wasn't a lesson in false pretenses. Rather, it was a simple case of supply and demand: most of the concession stands in the Daytona infield had closed while race cars continued to drone on. And those race cars had no immediate plans to stop their attack either, driving on and on twice around the clock and apparently straight through our heads.

So Chris (a longtime high school buddy) and I headed out, venturing in to the Daytona darkness in search of food and some sort of relief from the audial onslaught of Mazdas, Porsches, BMWs, Audis and more. The non-stop noise of the cars along the straightaways combined with the high pitches associated with downshifting and upshifting in and out corners had finally taken its unexpected toll. My head ached. Bad.

The Rolex 24 Hours of Daytona, in its venerable 50th edition, had taken us bright-eyed rookies by surprise.

After all, Chris and I had never tried endurance racing before. Both of us are longtime veterans of 16th and Georgetown in Indianapolis, having sat through our share of shivery-cold Pole Days and scorching practice ones. We aren't racing newbies. But the 24 Hours is a different beast, and 6 p.m. was merely a point in this year's race when everyone could look at a dark green Rolex clock in the middle of pit road and know that a mere 21 and a half hours remained.

And thus, Chris and I were fading fast. We sat in the McDonald's in the early Sunday morning hours, hardly tasting the food as the line grew longer nearby. I gazed at local high school kids skirting curfew, fans like us staring distantly in another booth and even track safety workers still in their yellow firesuits who stood in line as two hapless workers rummaged behind the counter in the unexpectedly-busy overnight shift. And still, the noise.

Even inside the restaurant, you could hear the damned cars. It was a dull hum, but it was always there — almost like a hive of bees waiting to attack outside your front door. The McDonald's parking lot could have been the Daytona garage area.

The leadup for Chris and I to our Daytona foray was akin to 10-year-old boys heading to our first sleepover. We were going to have our cake, our ice cream, our video games and stay up all freaking night in the basement, man. And just as 10-year-olds would, we did about everything you can do at Daytona within our first 12 hours on the premises.

We drank beer. We threw a football. We drank more beer. We wandered the garage area. We snapped photos that sexy new Daytona Prototype Corvette. We got in the way of cars being push out of the stalls. We stood atop the garage area, me pointing out trivial knowledge and Chris nodding. We walked along Daytona's scenic Lake Lloyd, and questioned the structural integrity of the infield midway rides. We drank more beer. We ate $7.50 Philly Cheesesteaks. We marveled at the new Nissans along vendor row. And then at Porsches. And then at BMWs. And, yep, we then found some more beer.

By then, the race was still two hours away. We couldn't decide if this was good or bad news. 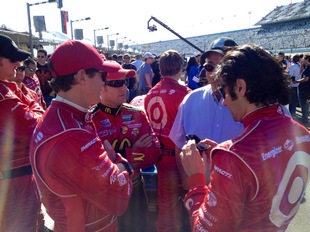 So we drank some more beer, walked to pit road and bumped in to the Ganassi guys. Chris shook Scott Dixon's hand and said "good luck!" — as if Dixon was needing a pep talk. We ran into an incognito Brian France. We got sunburned. We gazed too long at the NOS Energy Drink girls.

And finally, standing outside the chainlink fence near the east horseshoe, the 24 Hours of Daytona started. The Daytona Prototypes strutted by first, booming their low, rumbling engines. Then the Grand Touring class charged the corner, the whining engines of the Mazdas and Porsches drowning out the nearly-silent Ferraris and the Chevrolet Camaro that sounded more like a buzzing fire alarm. And nothing crazy happened. No one hit each other. No one spun. Hell, hardly a driver made a daunting move in our little corner. So we moved on.

Of course, we had planned our trip like complete rookies. We wouldn't need a hotel reservation because, duh, we'd just watch racing all night and sleep in the grandstands if need be. We just needed our Chrevrolet Malibu rental car — full-size, mind you — and ill-advised confidence. The confidence bubbled for those early hours, like the foam that sprung up each time we popped open a can of Yuengling Light. But soon, it was flat.

We had made it to the grandstands on the frontstretch and sat high enough to see the beach resorts along the Atlantic while the sun dipped and forced a shivery-cold retreat back to the Malibu for more layers. By then, the noise had rendered our ear plugs virtually useless and our ability to follow the race even worse. Renting a pair of radio scanners with full, over-ear headphones proved to the best $20 investment of the weekend.

But still, the noise. 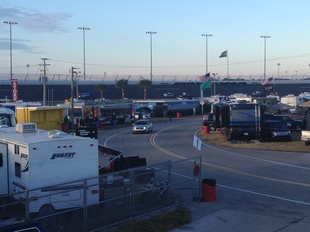 You could probably blame many things for how lethargic we had become while guys like Franchitti, Lally, McNish and more continued to perform at their best all around us. The list in our minds, however, didn't matter. We were tired, and the two Red Bulls in the trunk weren't going to fix that.

Somehow, though, we had caught a break after we met up to Chris' uncle for the second time in the day around 10 p.m. His uncle was tied to a sponsorship of the No. 67 GT team, and had planned to entertain clients in an infield motorhome. Those plans fell through, leaving an empty motorhome with heat and a pair of beds to crash on. And they were ours.

Talk about a pick-me-up.

The good news carried us for all of 15 minutes, but managed to be enough to push us through a first exciting and then excruiating trip to a soon-closing backstretch viewing area that featured a tram system obviously assembled by someone who bemoans efficiency.

Finished now at McDonald's, we headed back toward the glow in the sky along the wide-open streets built to accomodate a much larger race's exit and I, as driver, somewhat fretted the left-turn off Williamson back on the Daytona property. There was no hiding from those cars and that noise now. 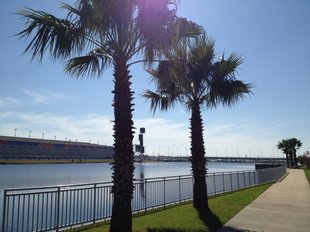 But that turn — back into the noise, back into the haze of racing exhaust and thick campfire smoke — proved to be worth it the next afternoon. Chris and I, perched once again in the grandstands, watched as the hours ticked by the intensity grew deeper. We saw the Ganassi cars struggle with their transmission on pit road, countless GT cars overshoot turn one and eventual winner A.J. Allmendinger bounce off of Allan McNish exiting turn two. It was thrilling. It was grinding.

Most importantly, the 24 Hours of Daytona was fun again. The sun beamed warmth, the competition was ragged. Who could hang on? Who would drop out? We had felt the intensity of going twice around the clock, even without a cockpit. And when the checkered flag flew and it all stopped — the noise, the action, everything — the contrast was more than strange.

For 24 hours, drivers, teams, fans, workers and more had battled to keep this race going, battled to get to the end. We weren't ready for it to actually end, rather just for it to keep going.

That's the grip of the 24 Hours, and that's a grip that draws drivers and fans alike back to this arduous journey of a racing event. It's not for the faint of heart, and those who finish it — no matter the trip getting there — feel an innate sense of accomplishment. That's what brings them back. That's what will bring me back.