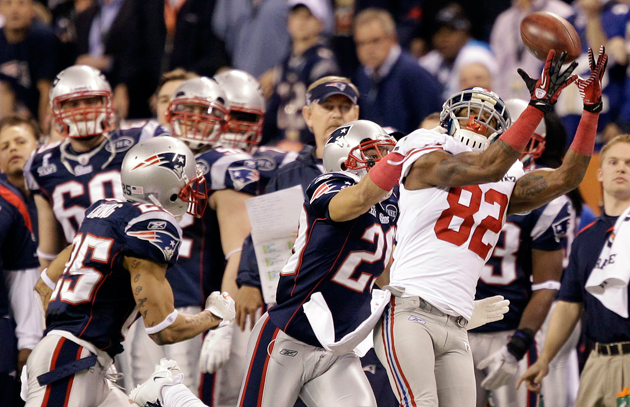 The biggest play of the Super Bowl wasn't drawn up that way.

Victor Cruz was standing in the slot on his own 12-yard line with 3:46 left in the game and his New York Giants trailing 17-15. To Cruz's right was wide receiver Hakeem Nicks and on the near side was Mario Manningham. The play called for Cruz to run a 12-yard route from the slot, and then he'd break into the middle of the field.

It was a play that should have worked against a New England Patriots defense that was lined up in a two-high shell with two safeties on either side of the field. The ball was supposed to go to Cruz, who had a first-quarter touchdown catch and was the favored target of quarterback Eli Manning throughout the season.

Even though the call was for Cruz to be Manning's first read on the play, the pass never went his direction. Instead, the ball went to Manningham on the opposite side for a 38-yard clutch catch that has become one of the iconic moments in Super Bowl history.

"I saw the whole thing - as soon as I turned I saw the ball and tracked it and I saw his feet go down," Cruz told Yahoo! Sports. "He was supposed to come to my side, but I feel like Eli wanted to make a play, so he looked off the safety to the right and threw an absolutely perfect pass to Mario."

Cruz had perhaps the best view of the play as he turned during his route -- he immediately knew it was a catch given his vantage point. As if that wasn't enough, the way Manningham bounced up after being pushed out of bounds told Cruz that the Giants had made the play. He admitted that waiting for the officials to confirm the catch was an excruciating process. 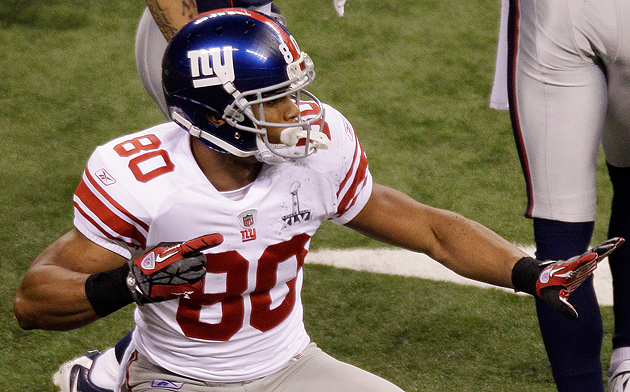 When the Giants returned to their huddle with the first down, they sensed momentum was in their favor.

Now Cruz enters the offseason after what was unquestionably the breakout performance of 2011. He played just three games in 2010 before a hamstring injury sidelined him and he failed to make a single catch in his rookie season. But in 2011, Cruz led the Giants with 82 catches for 1,536 yards along with nine touchdowns.

An undrafted rookie free agent out of FCS program UMass, Cruz is among the lowest-paid players on the Giants roster.

His stellar sophomore season in the league stacked against his pay — Cruz is slated to make $490,000 in 2012 — was a big reason why he won the Vizio Top Performer Award for outperforming his contract. The Vizio award is given to a player who outperforms his current contract and he beat out nominees such as Matt Forte and Rob Gronkowsi for the honor.

Though his contract runs out next year, Cruz is hopeful that he will commit to the Giants with a long-term deal this offseason.

"I just want to have my agents and everybody take care of the stuff, but I definitely want to remain a New York Giant for a very long time. Hopefully we can just go into the offseason and my agents make the right decisions and come to some kind of an agreement," Cruz said.

"I'm willing to wait, but that's something my agents are going to have to take care of."

From an injury-plagued rookie year where he failed to make an impact to winning a Super Bowl and now a possible big contract, it has been quite the year for Cruz. His post-touchdown salsa dance celebration has become a hit and now he's a bit of a pop icon. It could be too much, too soon for some young players, but Cruz credits Manning and teammate Justin Tuck for helping to keep him levelheaded.

Cruz even turned down "Dancing With the Stars" this offseason, choosing rather to focus on football. It isn't about the exposure and money, he says.

"When you were young and you just played this game for the love of it — it wasn't for the money or anything like that. I play this game for the love of it. I knew coming into this league that I was going to have to earn my keep and really make the team and do all the right things. I understand that and I understood that I have to go out there and take care of what I can take care of," Cruz said.

"And the contracts and everything else will take care of itself."