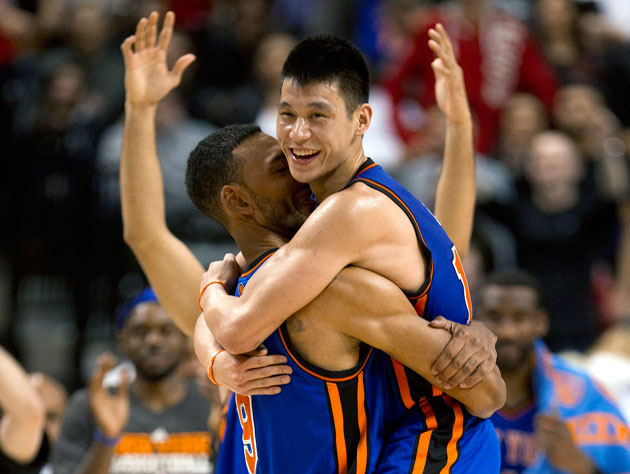 Two heroic shots, two players at opposite ends of their careers, one 23-year-old in the middle of a real-life daydream that has made everything else pale in comparison.

Bryant's dagger against the Toronto Raptors was the 16th game-winning shot in a career that had spanned 49,386 minutes. The shot was brilliant, but it was expected.

Lin's three-pointer to beat the Raps was the first game-winning shot in a career that has seen him play just 576 minutes. The shot was brilliant, but it was something none of us could have ever expected.

When Bryant finished his television interview, he sauntered toward the locker room and looked over at the reporter and locker room attendant standing beside the locker room door. He smiled. He shrugged his shoulders. He shook his head and chuckled. He had made this walk many times before.

Fifty-five hours later, Lin raced toward the locker room, welcoming an escape from the attention, cameras and questions. Exhausted, he glanced over in my direction. He looked straight through me, though, a dazed look on his slightly smiling face. As he entered the locker room, his team erupted. Before the attendants could close the door to allow the team privacy to celebrate their hero, the booming cheers zipped through the air and into the hallway.

This is what Jeremy Lin has done.

More thrilling than sinking the game-winner and more crucial than the six consecutive victories, Lin has given the Knicks life.

In the span of 10 days, he has made them believe.

He has made them act like a group of high schoolers in a locker room. He's made them fall over themselves praising him, defending him and encouraging him. He has had his life turned upside down as he's gone from last man on the bench to fully-guaranteed contract to writers-flying-to-Canada-from-all-over-the-U.S.-to-see-him-play status, and he's barely batted an eye. Occasionally, he has allowed himself to break into a sheepish smile as he takes it all in.

He has made the sports world stop, listen and look, wide-eyed and fully engaged, as he continues to simultaneously defy expectations and exceed the ever-mounting hype. Perhaps most importantly, he has reminded us all why we fall in love with sports in the first place, why we pass that love along to our children and why we want to see someone have their dream come true so that we have something to believe in.

Lin represents hard work. He represents staying true. True to one's faith, one's dream. Committed to one's own path. He didn't get here by following the road map created by someone else. From Harvard to Golden State, Houston to New York, this blueprint is his and his alone. He's earned it, just like he's earned the respect his opponents are learning they have to give him.

Looking around the Knicks locker room during pregame media availability, you would assume the Lakers are in town. You then remember that they were here but 55 short hours ago, their superstar hitting that game-winning bucket that was replayed on highlight reels for 24 hours afterward. You realize that buzz was nothing like this buzz, this electricity in the Knicks locker room before a Tuesday night game against a 9-20 Raptors team. There were never fewer than 25 people in the room for the duration of media availability. Everyone wants to observe the spectacle, experience the mayhem.

The problem is, there isn't anything special or out of the ordinary outside of the throng of reporters.

Off of the court, Lin is the opposite of flashy. Third from the right, sandwiched between Landry Fields and Jerome Jordan, Lin's locker is free of jewelry, high-fashion designer threads or $1,800 jars of lotion. There's a watch sitting on the bench, a watch without any diamonds, black, white or gold. There's a book propped up against the locker, "Mastering the Art of Success," that was hand-delivered by former Raptor and Knick Jerome Williams.

Baron Davis sits in his locker, takes in the scene around him. It was a setback suffered by Davis weeks ago that put Lin into the starting lineup, a setback that propelled all of this into motion.

"It's all opportunity," Davis explains. "That's what this league is about. You see a lot of players that you wonder why they never have the career. They have the talent but not the career and it's because of opportunity. A lot of it is right place, right time, right situation. That can make or break somebody's career."

As all eyes follow Lin from the doorway to his locker, Davis smiles.

"He's not one to get caught up in this stuff," Davis says. "I don't see how this will change his perception of where he is. He's a spiritual person and he's very grounded, he's a very humble kid. I don't think all of the hoopla really has any effect on him at all."

But has Davis, in all of his 13 years in the league ever seen anything like what he's currently witnessing? He laughs heartily and answers quickly. "No, not at all. This is ridiculous. It's crazy."

A locker room attendant brings over Lin's sandals. He ducks a cameraman positioned squarely in front of him, pats the attendant on the back while saying, "Thank you very much." Slipping into his sandals, he slides through the doors to the showers and leaves us to keep each other occupied until the PR official kicks us out and closes the room.

After the game, it's the same exact thing. After the team has celebrated with Lin and the doors are opened to the media, his teammates are laughing, smiling, enjoying. Enjoying the victory, enjoying the performance, enjoying the camaraderie. Lin quietly gets ready to address the media, seemingly oblivious to everything around him, the excitement that his six-game stretch of success has created.

If the magnitude of this story hasn't yet been made clear, consider this: A security guard and two PR officials escort Lin from the locker room to the Toronto media room where a podium was set up for him. The last time this room was used for a post-game press conference? When the space was needed to accommodate LeBron James, Dwyane Wade and Chris Bosh in Bosh's first return to Toronto after bolting for South Beach to join the Miami Heat.

Unlike the Heat trio, there wasn't an hour wait for the press conference or any stifled laughter. Not a hint of anything other than a young man who could only shake his head and admit that, no, he did not see this whirlwind coming, either.

This is a story that begins on a basketball court, but extends far beyond those 94 feet. It's a story of belief and perseverance, of passion and humility. It has captured us all because we don't know what will happen next, how long Lin will continue to dazzle us. It's captured us because we already know that it doesn't matter how long it lasts from here. What matters is that it's happened at all.

Back in the Knicks locker room, Amar'e Stoudemire is dealing with reporters in his first game back after taking time to grieve for his older brother, who died in a car crash nine days ago. He compares Lin to Steve Nash, the man who many credit for Stoudemire's own ascension into stardom.

Tyson Chandler is laughing, smiling over how he and Stoudemire celebrated Lin's three-pointer, talking of expectations and reminding us that this was the guy who was "probably days away from being cut."

I ask Fields about the night that Lin crashed on his couch before his first career start. A whopping six games ago. I ask if either of them could have ever envisioned this, that two weeks later they'd be in Toronto with more than 100 people on hand to talk to Jeremy.

"What's going on right now? No! You can't even write this. This doesn't happen in movies," Fields says. "… I hope this is the beginning. It's great. It's phenomenal. It's an inspirational story right now. It's something that we're going to look at over time and take a lot from it.

"At times I find myself speechless, just to be a part of it," the shooting guard continues. "Sometimes I have to step back. I'll have to write my memoirs about it all. It's the kind of story that we need. A lot of times people get bad reps out there, a certain type of athlete. To see this happen, it's really … it's phenomenal."

Lin has made them believe.

"It means everything," Fields says. "It shows the kind of relationship that we all have with each other. We're not just players, we're not just teammates, we're actual brothers."

After finishing his media duties, Fields sits down in his locker. "It's one of those things where you lay in bed at night and you just go, 'Haha.' You just chuckle about it."

He smiles once more. "Now that I have come off my life high, I can eat." Taking a moment to gather himself, he begins to dig into the pasta in front of him as the locker room slowly empties of reporters who have deadlines looming, and his teammate's story to tell.

Holly MacKenzie is a lover of all things basketball, especially rookies and underdogs. The draft class of '96 holds a special place in her heart and she cannot wrap her head around the fact that Kobe Bryant has been playing professional basketball for 16 years. She has written for SLAM Magazine, HOOP Magazine, The Basketball Jones, NBA.com and various other stops along the way. She counts Jesus Shuttlesworth jumpers rather than sheep when she can't sleep. You can hear her basketball ramblings on Twitter by following @stackmack.