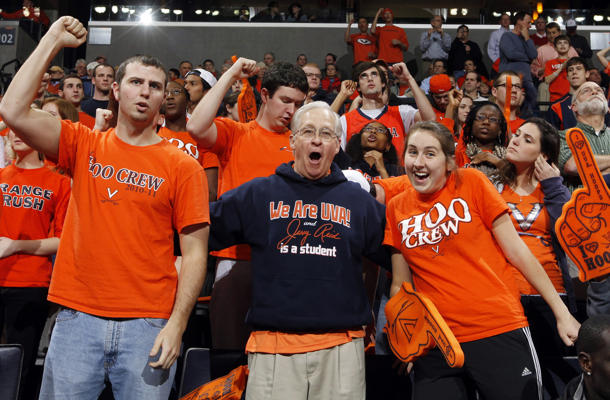 If you've seen the 2003 movie "Old School," you are familiar with the character Blue Palasky: the 88-year old fraternity pledge who rushes a house run by men having a collective mid-life crisis.

Well if you got a kick out of Blue, you'll love Jerry Reid.

He's a 67-year-old, real-life Blue Palasky who filled a void in his life by heading back to school to get a college degree after most people retire. He's now an undergraduate at the University of Virginia, member of the Chi Phi fraternity and a UVA sports fanatic enjoying the school's basketball's revival this season.

Said Reid about the mood on campus: "It is astounding because many of the times I was up here, except for the Ralph Sampson and Jeff Lamp era, there was not that excitement rolling around."

It's little wonder. Virginia is a program that has reached the NCAA tournament just twice since 1997 and hit rock bottom in 2008 with a 10-18 record. But now the Cavaliers are ranked No. 19 in the country and looking to reach the Sweet Sixteen for the first time in nearly 20 years.

Heck, the average undergraduate at Virginia wasn't even born when the program reached the Final Four twice in the early 1980s — something that makes Reid especially useful to his fellow students.

"I'm called on all the time to answer questions about what it was like in the day," Reid said.

Forget Final Fours, the current senior class is looking for its first trip to a postseason tournament of any kind next month. That much is a near-certainty as the Cavaliers are currently 19-4 after a 68-44 beat down of Wake Forest on Wednesday night, where you could find Reid in the student section with this sweatshirt that reads, "We are UVA! and Jerry Reid is a student" (it also helps distinguish him from professors in classes).

Reid said he is used to skepticism from his fellow students about his ability to hang with their youthful legs but is quick to dismiss it. 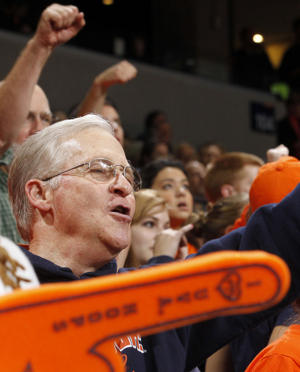 "When I'm jumping up and down and doing the jump pound with them, (the students) tell me, 'You can't sit down, you've got to be on your feet the whole time,'" Reid said. "I say, 'You just watch, I'm with you.'"

He already has plans to attend the ACC Tournament in Atlanta and would like to see the Cavaliers play in the NCAA tournament in person if they make it far enough.

But what exactly is Reid doing on a college campus anyway?

He failed to graduate from high school on time in the 1960s but used to party on Virginia's campus with a friend attending the school and actually he met his future wife there. After a long professional career that included everything from sports writing to working at a conveyor belt company, he felt an urge to finally get the degree he never received earlier in life.

So Reid took courses at a community college to apply for Virginia's Bachelor of Interdisciplinary Studies program and then moved from Richmond to Charlottesville to enroll at the school of his dreams in 2009.

Reid is on pace to graduate in the fall of 2013 and wants to teach writing afterward. He hopes to find a position at the university as he'd like to live in Charlottesville for the rest of his life.

"I'm not ever going to retire from anything and I hope to be in a classroom teaching experientially when I'm 70," Reid said.

Now in the same fraternity his friend joined almost half a century years ago, Reid is currently featured on the Chi Phi website with a headline that reads "World's Oldest Pledge?" In it, Reid quotes Thomas Jefferson by saying, "Friends we have if we have merited them. Those of our earliest years stand nearest in our affections. Our college friends are the dearest."

Despite the similarities to the aforementioned "Old School" character, Reid says he's not often compared to Blue Palasky for one simple reason.

"At age 67 I've retained my moves and I'm able to dance the style of music they've got going," Reid quipped.