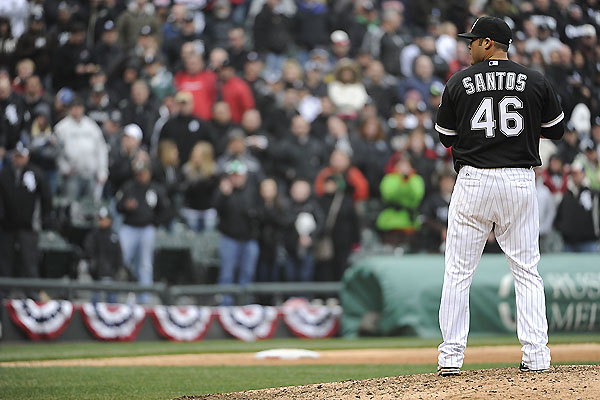 Traffic on the 2s, weather on the 5s, and White Sox bullpen updates on the 7s. That's how we roll around here.

Sergio Santos gained traction in the Chicago bullpen Wednesday afternoon by not pitching against Oakland. Meanwhile, his save competitors were on the mound and making a mess of things.

Chris Sale started the ninth for Chicago, trying to protect a three-run lead, and promptly allowed three hits. Exit Sale, enter a wild Jesse Crain (walk, strikeout, 7-of-13 pitches out of the zone). Matt Thornton came in next, blew away Ryan Sweeney, then allowed a two-run, game-tying dunk of a single to Cliff Pennington.

Okay, it's hard to fault Thornton for entering a spot with so little wiggle room and not doing the job – especially when the lead evaporates on a somewhat-cheap hit. But Thornton had no excuses in the tenth, when he walked two men in a row and then allowed two sharp singles. Ballgame. Ozzie Guillen mercifully removed Thornton after that.

Sale certainly has an excuse – after throwing 35 pitches in Tuesday's night game, why even use him Wednesday? Only Ozzie can answer that (and probably in Spanish).

Santos also worked in Tuesday's win, retiring six straight men and striking out three. He's pitched 7.2 scoreless innings on the year (5 H, 3 BB, 9 K) and when his slider is on, you wonder how anyone ever gets a hit off this guy. He's a converted pitcher, just over two years into the new gig. Maybe this is another Carlos Marmol story waiting to happen.

If I had one play to make in Chicago's bullpen right this second, Santos would have to be the choice (with Sale second). I realize he's gone in a lot of highly-competitive groups, but otherwise this is a freely-available arm, currently unowned in 98 percent of Yahoo! leagues. Santos has long had the Behrens endorsement and he's also scored the Evans endorsement; as soon as Funston checks in, we'll all be recommending Trident.